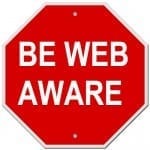 Those of us of a certain age remember a pre-internet time when a school project meant browsing through an encylopedia or a trip to the library.  Or how when we needed a plumber in a hurry we had to rely on the trusty phone book or family/friends.  Now we’re connected practically 24/7 and it’s made for a very different, albeit fascinating world and often such development brings with it risk – and fear of the unknown for those who aren’t regulars on the web.

Those who are aged 18-34 are now considered Generation C or Generation Connected, as they generally are logged in quite a lot of the time.  And although they’re no longer our concern in terms of internet safety, those coming after them are.  Children born in this century, pose an even greater challenge for us.  Who hasn’t commented on the fact that they’re more likely to write gr8 to save precious characters when they really want to say great?  Or marvelled at how the little people in their house instinctively know the workings of a smartphone straight from the box barely glancing at a manual?  When walking the streets my 5 year old finds a phonebox fascinating, why after all would he even dream of a phone that didn’t sit in your pocket?

The pros of the internet are many and include improved communications, expanded marketplaces, enhanced educational opportunities and even new industries which would not be possible without the web – even though there are indeed industries that have almost disappeared because of the web also.

The internet develops at a rapid pace and it’s such changes that can create a sense of panic and in fact open up people to risks that they may not even be aware of – and that would be adults as well as children.  Although in an adult’s case it’s not so much advances from anonymous others or cyber-bullies, more so a lack of protecting their identity – but that’s for another day’s post.

Social networking in particular tends to get bad press and sometimes this can be justified – it is after all not always easy to know where the kids are hanging out online these days, never mind familiarise yourself with privacy settings.

Often it’s left to schools to educate kids but as anybody who has ever witnessed a 3 year old with a smartphone can tell you, by the time our children reach school they’re already pretty comfortable with terms like youtube or google and can quite probably download apps to keep themselves amused.  How does a teacher compete with that when they’ve got to work with pencil and paper?  Or how as they get older does an educator deal with a student who can probably do their homework quite easily with a little help from google?

Parents have a responsibility to know what their children are up to.  As somebody who spends a lot of time online I do appreciate that I might be a lot more web-savvy than many but I’ve lost count of the number of adults I’ve spoken to who allow their children use Facebook and don’t even have an account for themselves.  And yes, it is often children – frequently with their parent’s knowledge – using the platform despite the required age of 13, given that all it takes is inputting the incorrect date of birth.

Some of these parents have allowed their children access to take part in games but is that really sufficient excuse to open up a world of social networking to a child?  I ask parents to think, would they allow their child out into town on a Saturday night unsupervised and generally the answer is a resounding NO.  Yet, these same parents frequently don’t know who their child might be speaking to on the web?  Or what they might be plotting?

Tuesday 5th February 2013 will be the 10th World Safer Internet Day and here are some of our top tips to make enjoying the web a safer experience in your home;

We would suggest that parents need to;

While many parents are not happy to engage in social networking, it is important that somebody close – even a trusted friend or aunt – knows what your kids are up to, for everybody’s sake.

For those of you who may use social networking sites or who wish to learn more, these are a number of resources you can refer to;

The internet is one of the greatest inventions ever, it’s not going anywhere even though there are calls for it to be moderated or restrictions put in place – primarily a knee-jerk reaction from people who feel restricting the unknown is preferable to educating themselves.

The most effective way to deal with it is education and acknowledging that it’s here for the long term even though trends will dictate which social networks are in fashion and to what extent your family use it over the years.

Knowledge is power – learn how to deal with it, teach your kids to respect it, play safely and enjoy it for the wonderful resource that it is.