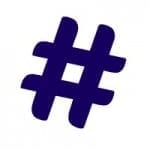 For those of you familiar with twitter or instagram you’ll be familiar with how the hashtag or # works.  Essentially it differentiates your conversation thread so that those with an interest in a particular topic can follow what’s being discussed on it.

Following rumours which started earlier this year hashtags have now arrived on Facebook too so that we can now follow threads in conversations based around who we share our updates with.

Starting 12th June they will be rolled out to all users and this feature arrived in Ireland 13th June.

It’s a positive development for those using Facebook for business but like everything else you will need to think about how best you will use this feature effectively.

So, what essentially will be happening and why should you care?

Those of you who use twitter regularly would be familiar with an update such as this where on this occasion I posted a tweet that I wanted to appear in any threads related to Clontarf, the area I live in;

Well, going forward you can get used to Facebook updates such as this;

In this instance I have inserted the # symbol before the world #hashtag as given the fact it’s topical in social media today it’s a conversation thread that I would like my comment to appear in amongst those who have the feature already.

So how will you use it?

And what should you not do? 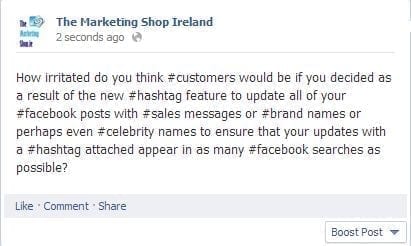 And what else do you need to think about?

Undoubtedly there will be some people who overdo the hashtags but no matter how keen you might be to appear in as many search results as possible, think about the end user and remember that frequently less is more!

You can read the update from Facebook Newsroom by clicking here.

In the meantime, as a marketing company we think this is great news 🙂

Good advice in life and business, every step forwa

A thought for the week ahead, have a good one! #t

Do you need help with creating a Marketing Strateg