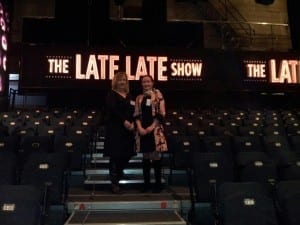 On International Women’s Day an event with a difference took place at RTE Studios in Donnybrook.  Ulster Bank’s Small Business Can‘s initiative “Business Women Can” were treated to a women’s day to remember.

To start with we took in a tour of the TV studios where we visited the studios which host Prime Time, RTE Sports, The Late Late Show and of course the set of Fair City where we had the opportunity to check out the famous McCoy’s pub together with Vino’s Bistro, The Station Bar, Phelan’s Shop and relatively new addition, The Hungry Pig.

It was quite an education to get even an idea of what goes on behind the scenes at the national broadcaster – and we did catch a glimpse of a couple of well-known faces who were quite probably surprised to find themselves come face to face with a group of women as they took a break between scenes.

Following our tour of the TV studio we were treated to a panel discussion with Claire Byrne, Broadcaster with RTE alongside Claire Duignan, Managing Director RTE Radio and facilitated by David Murphy of the RTE Newsroom.

Claire B and Claire D had some superb insights to share with the assembled party.  Claire D informed us she’d joined RTE only years after a ban was removed in Ireland which required women to give up a job upon marriage – quite shocking to think that was 1970s Ireland.  Claire B has enjoyed a career which included time at BBC, TV3 and Newstalk in addition to RTE and it would appear has always had broadcasting in her sights.

The topic of gender quotas in Irish life was one of the issues discussed and although the group were quite split on whether it’s the ratio of males to females or the right person for the job that matters most, I would think it fair to say that regardless of which side of the issue you stand we were left with plenty of food for thought.

Following lunch in the RTE canteen which involved lots of chatter and a couple more familiar faces from TV, it was time for a media training session with Jill Collins of Fuzion Communications.

Jill’s experience made her the perfect candidate to share a few tips of the trade with the group.  From staying on message, to focusing on where you’d like to get exposure for your business not to mention top tips on what to wear for TV, this was a superb session which most certainly left me with a few ideas I’ll be following up on!

Once our media session ended we had a tour of the RTE Radio Studios and again it was quite interesting.  In between visiting the studios which have hosted Pat Kenny, Marian Finucane and even the late Gerry Ryan to catching a little of the RTE Concert Orchestra in rehearsal, it was an educational as well as enjoyable experience as we gained some  appreciation of what really goes on behind the scenes that from the outside you quite probably hadn’t considered.

Whilst it was a thoroughly enjoyable day out, it was also a wonderful opportunity to network with people from other businesses and from within Ulster Bank.  And while it was predominantly females in attendance amongst both the banks ambassadors, the external ambassadors (of which I’m one) and other guests, there were  a number of males from senior positions within Ulster Bank in attendance as this is not a “women’s network”.

Business Women Can is a supportive environment focused on encouraging females to consider the entrepreunership option as a careeer and on helping them with their existing businesses.  This initiative is geared towards enabling women to put themselves forward and look to fulfilling their potential.  It’s not about providing finance or grants as might be the case through other organisations, it’s about helping females to put together viable business propositions and exploring options that aren’t ordinarily considered.

Having attended a number of events in conjunction with Business Women Can, I’ve come to appreciate that whereas people are often in awe of their bank manager, they do actually want people to succeed and do want to help people move forward.

I’m proud to be an ambassador for Business Women Can, have met some wonderful people and look forward to seeing the  initiative grow.

To finish with, one of my favourite quotes of the day came from Claire Duignan and it had been borrowed from Eleanor Roosevelt;

“Women are like teabags, add hot water and they get stronger”

Add women in numbers and we can achieve anything.